I lit out of Livingston, MT on July 1st in a very hopeful state of mind. The plan was to meander down towards Denver, arriving on July 28th in advance of a Lifetime Achievement Award ceremony being given in honor of my brother-from-another-mother Jason Kraus. A long-overdue honor btw.

Dispersed camping is generally defined as camping out in the wild. No electric. No water. No Sewer. And as often as not, no internet. I’ve dispersed-camped quite a bit since this adventure began and I’ve been pretty lucky in researching and identifying attractive, livable spots – with at least a bit of connectivity – where I could drop anchor and exist a while in nature.

My plan from the start has been to be fully plugged in at an RV campground half the time, and out in the ‘country’ the other half. Unfortunately, as I’ve pointed out in previous posts, I quickly discovered that it’s hard if not impossible to land somewhere in the wild that isn’t infected by streams of ATVs, four-wheelers and motor bikes. In fact, the very first RV park I camped in on this journey was such a draw for the ATV hordes that, even within the RV park itself, it was hard to achieve even 15 minutes of serenity. That was Silverton, Colorado, one of the most picturesque spots on the planet. It was being virtually raped by intensely selfish, aggressively ignorant and, it appeared, generally angry patriots. (Lots of American and other flags flying.)

Happily, I haven’t yet encountered quite that degree of havoc at subsequent RV parks I’ve visited. A few have been downright pleasant. My dispersed camping experiences, however, have been quite another thing.  These past five days, in fact, ironically our celebration of independence, have tended to crush my spirit.

There is no independence from the virus of all terrain vehicles. In fact, every national forest I’ve visited has been generally overrun – subsumed really – by the near-constant scream of racing engines and their riders. they are men and women across all age groups including scores of thoroughly infected children. Even large wedding parties celebrate in streams of dozens of ATVs careering through otherwise magnificent, majestic landscapes without a thought of the environmental damage, unspeakable noise pollution and just plain obnoxiousness that they live for. 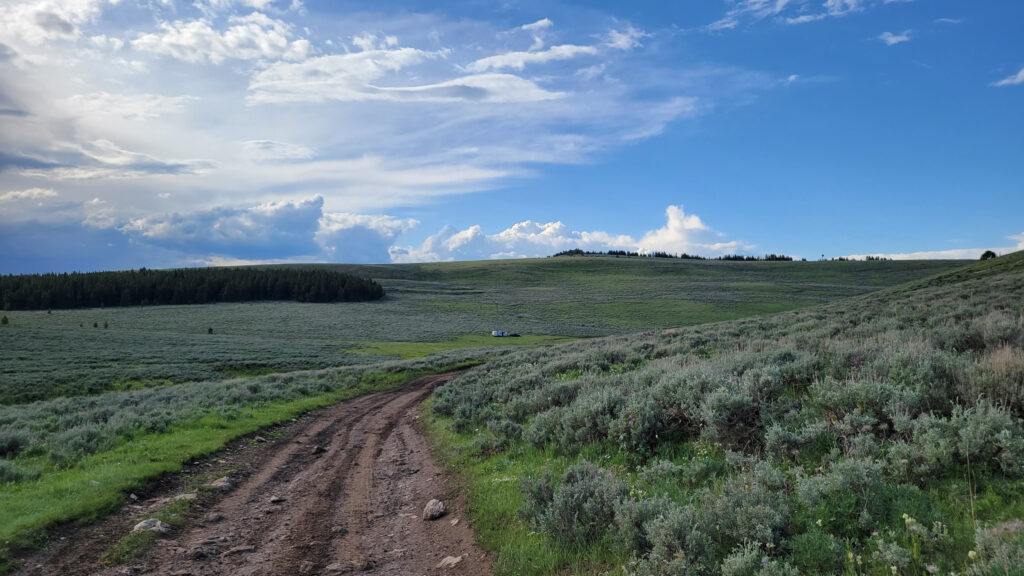 If you click the image – or look closely – that’s me right in the center. In the middle of a giant, overgrown meadow. Getting there wasn’t easy pulling a 27 foot travel trailer weighing several thousand pounds with a half-ton pick-up. It’s high up. High enough and steep enough and far enough that I came within a centimeter of full-on engine shut-down. That was on me. Badly, hastily performed research. I was forced to pull over for a while so my poor engine could cool the fuck off. The only upside (npi) was this view

When I finally arrived at Freeze Out Point and slogged into that meadow, I realized just how big a mistake I’d made. First, I’d ignored the fact that July 4th weekend begins long before July 4th and that the best spots would already have been taken. So I pulled into the middle of that meadow, an environment extremely inhospitable to human animals. Fine for moose and deer – a couple of moose and a deer grazed nearby during my visit – but not a place any human would want to walk around in much less lounge.

I knew I’d be stuck in the trailer. Basically impossible to hike around much less grab the bike off the rack and tool around. And, for the first time, truly no internet signal. Not for miles. Off-grid. Utterly alone. Except, of course, for the virus (which doesn’t even slow down much in the rain)

I haven’t seen much rain at all in the nearly year that I’ve owned the trailer. On my second lonely night in the dreaded meadow, it rained hard. Massive drops. The intensity backed off after a short while but, for the first time, my roof leaked. It leaked in three different places along the seam of the slide, right down onto the center of kitchen table which is my everyplace in that trailer, save for my bed and the bathroom. Pots and pans, place mats, paper towels and invectives.

I didn’t know quite where to, but I knew I had to bug out. I hated that meadow, I hated the virus and, for the first time, I began questioning my general situation.

You know how they say don’t drive angry? Well, the next morning, I was still angry. Since I hadn’t unhitched the truck, I didn’t do my usual multiple circles around the rig, ensuring road-readiness, prior to shoving off. And I was desperate to remove myself from that hellish place.

By the time I’d realized that I’d left the steps into the trailer out and down, I’d driven about a quarter mile over rough terrain. Using all my weight against the now seriously bent set of stairs, I managed to right them just enough to force them into the doorway and close the trailer door. Increasingly despondent, I heading for another previously identified, dispersed camping spot about an hour and a quarter further south within Big Bear.  another lesson learned. Ugh.

On the way down the mountain, this time being pushed by vs. pulling those thousands of pounds of trailer, and neglecting to switch the engine into ‘tow mode’ which maintains lower gears and helps keep the brakes from overheating, the brakes began overheating. Badly. I, too, was overheating, badly, and beginning to feel that one feeling that you never ever want to feel: helpless. I pulled over and hoped I hadn’t done permanent damage to the brakes. Yet another in the deepening well of lessons learned. Ugh.

I arrived at the new spot. Getting there required yet another climb, though not as steep or as long. This time I was at the edge of a pine forest. Brother Scott had sent me a care package back near the beginning of the journey that contained a box of a hundred purple gloves, a can of bear spray and specially formulated tape for leak repairs. (Leak repairs!)

Just before leaving the RV park in Montana, I’d ordered a bunch of supplies from Amazon including something I’d needed and pined for (npi) since day 20 or 30; a ladder. I’d recently done the requisite research and landed on what I determined would be a reasonably reliable collapsible ladder, one that wouldn’t kill or main me. Without going into detail, I felt I could keep the leaks at bay, at least temporarily, with that tape and my new ladder. Rain was imminent. I climbed up, did my best with the tape, and climbed down. The ladder worked flawlessly and I’d apparently plugged the leak, for now.

Still no internet. But, always, the virus…

After a night highlighted by an hour-or-two-long anxiety attack, I awoke to find that the refrigerator had stopped working. Dead. (I believe it was the 3rd time the fridge had failed.)

Following my own advice when faced with a crisis, advice I’d passed along to colleagues and many others through the years, I did nothing. (Technically, the advice is “First, do nothing. Second, do nothing.”)

It was now the fourth of July. I resigned myself to the situation. I would remain in this gods forsaken state of Wyoming for another night and figure it out in the morning.

Now July 5th, (the real holiday apparently – who knew?) I texted my service contact at the manufacturer with my woes and then texted both the co-owner and sales rep of the dealership in Denver where I’d purchased the RV this past August. Typically responsive, the sales rep called me minutes later. I’d already decided to make the six-hour drive to Denver in hopes (I hadn’t abandoned all hope) that the dealer would agree to let me cut the line and make me their priority the next day. He said they would.

I spent last night at an RV park just down the road from the dealership and dropped the trailer there by 8:30 this morning.

As I write this, I’m sitting in a Starbucks parking lot awaiting word. There’s a chance that all three issues, the leak, the fridge and the stairs, will be repaired/replaced by end of day. There’s also a chance that it will take days or even a week or more. For now, I’m delighted to be out of the loop entirely, my fate resting in others’ hands.

In the meantime, I’ve managed to get a little bit of my smile back, if not a bit of heart.

Today, ignorance is the most wonderful bliss.

6 Responses to “It Sucks to Lose Heart”

This site uses Akismet to reduce spam. Learn how your comment data is processed.