First, apologies to my loyal readers. Long time no nothing. I’ll try to do better. On the plus side, I’ve finally begun writing the script for the TV series that I’d written a treatment for a year and a half ago. Middle of page 11 and encouraged by the direction it’s taking. Let me know if you’re interested in providing honest feedback at any point.

As for the Apocalypse, it’s real, it’s annoying and it’s not going away. Sorry for the bad news, but the scientific warnings have been coming for about half a century. Humans, especially those in power, are unimaginably irresponsible and, as evidenced by the global political climate, consciously, aggressively ignorant. Oh well. Not my problem. It’s up to millennials and Gen Y/Z to try and make survival survivable for themselves, the Alphas and beyond. A pretty slim opening, and an even slimmer chance of success after 50 years or so of inaction – beyond ancient (now) auto/fuel standards.

I’m living the current state of the Apocalypse as we speak. It’s already impossible to rely on historical weather data for even near-term predictions. From one’s house or apartment it’s relatively easy to be distracted from our already terrifying climate realities. Living as I do these days, there’s no distraction and no escape.

I’ve been on the road for over ten months and I’d estimate that 85 to 90 percent of that time has either been way too cold or too too hot. My naïve plan was to follow the sun. Essentially, I’d imagined, don’t be in Arizona in the summer or Montana in the winter. Well, I was in southern Arizona much of this past winter where it was way too cold, often hard-freeze cold. I was in Montana the second two weeks of June where it was way too hot. In the low to mid 90s pretty much every day. In-between, spring lasted three or four weeks.

I expect to find some relief in a couple of days when I travel south of here to Durango, where I’ll be camped out at my favorite RV camp to-date for about a month. It’s ‘expected’ to be about ten degrees cooler than here. Here, by the way, is on a mountainside maybe a thousand feet above Grand Junction Colorado in a National Monument campsite. As I write this, it’s 5:55 pm and 90 degrees in the shade. (There’s almost no shade.) It was up to 94 or so earlier. Down in nearby Fruita, where I escaped in my air conditioned truck for 90 minutes earlier today, it was 97.

Hey, did I mention the air quality? No? Smoke from the Dixie Fire in California has made the air quality in my exact location among the worst on the planet – literally – for the past couple of weeks. So there’s that.

In this photo, you should be able to clearly see a city out there and beyond the city, mountains. This was not the worst smoke day of my stay. It got much worse. (Click the image for a better view.) 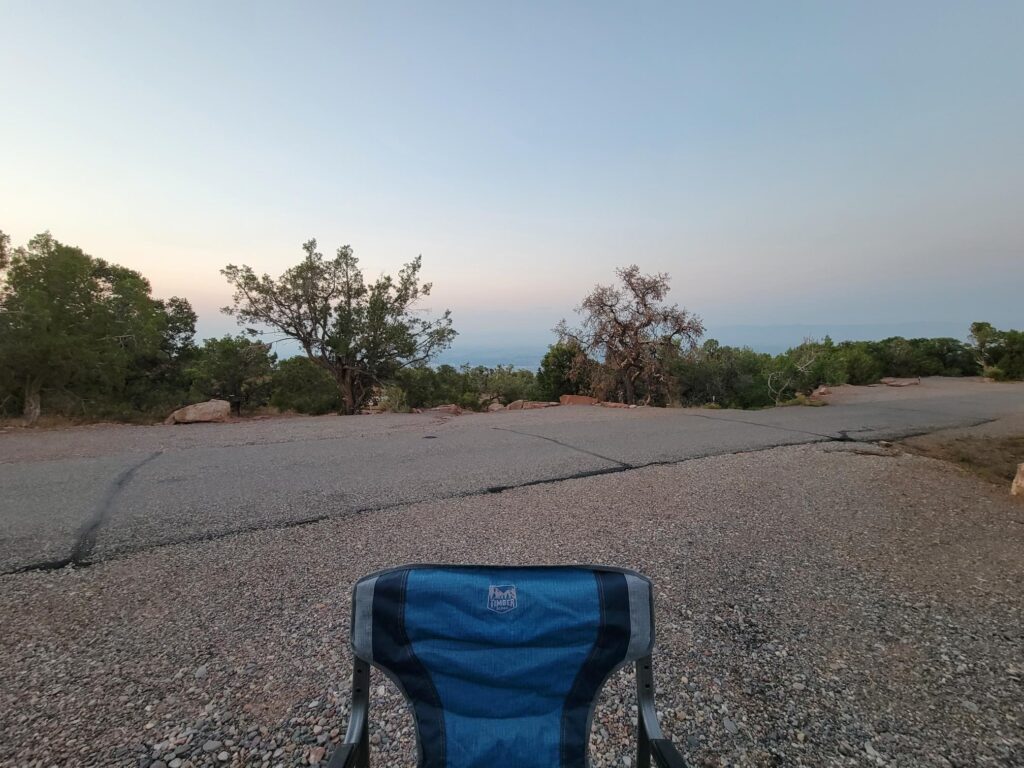 Of course, in the trailer, it’s at least five degrees warmer than the outside temp and sometimes warmer than that, depending on the layout of my site. No fan (or fans) makes more than a degree or two difference, and sometimes, it makes it worse. I’ll have to take a course in thermodynamics to understand why. I do have AC in the trailer, but when off grid as I am right now, it’s gotta be used sparingly. Making matters worse, I’ve been getting little to no positive charge to the batteries from my solar panels for the past several weeks, so I must charge up with my generator alone which is a real pain. I’m hoping to get this addressed somehow in Durango.

Here’s a view from very nearby my present campsite. Maybe 50 yards away…

For anyone wondering, my week-long Denver stop for Jason’s Lifetime Achievement Award luncheon was wonderful. The event itself was just fine, but spending three nights plus a couple of afternoons with Jason and his family was manna from heaven. I’ll post up some video of the event soon.

One Response to “Living the Apocalypse”