Regarding Claude Brown’s Manchild in the Promised Land, I *did* read it and liked it a lot. I’m pretty sure what I read back in grade school and Jr. High for those 3 book reports were the Cliff Notes.

I randomly grabbed the next book from one of the two bins of books I brought along in the back of my pick-up and came out with Here I Am by Jonathan Safran Foer. Thanks to recommendations from my buddy Jason, who reads something like 300 books/year and often encouraged me to read when I badly needed that encouragement, which is to say my entire life until a couple of months ago, I’d read his previous Everything Is Illuminated and Extremely Loud and Incredibly Close. I enjoyed them both very much so I was only slightly intimidated by this latest book’s 571 pages.

Plot: A sexually and otherwise repressed Jewish man just hitting middle age with three young sons, including Sam, who’s Bar Mitzvah is fast approaching and who very badly doesn’t want the honor, is sexting with a colleague at the TV series he writes for, which leads to divorce from his patient yet school-marm-y and repressed wife. Along the way, (actually not for hundreds of pages,) the man’s Holocaust-survivor grandfather dies, there’s a massive earthquake in the middle east and Israel survives another war.

There. I did in 2 sentences (yes, one is run-on) what Foer took 571 pages to do. The last 250 or more were a real slog, but in honor of my brother Jeff, who won’t leave or turn off a bad movie until the last credit rolls, and Jason, who won’t put a bad book down until the last word, I’ve committed to reading even a book like Here I Am until the bitter, literally in this case, end. Ugh. For whatever reason, Foer decided that, with this novel, why use ten words when he could go on and on – and on – for ten pages instead.

By the way, Everything is Illuminated is a really good movie too, notwithstanding the one sheet. 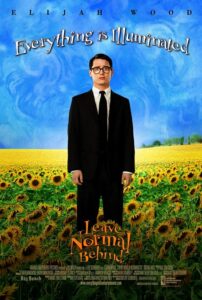 As evidenced by my 180 degree turnaround in reading, the day I closed Here I Am for the final time, I began reading Bird By Bird by Anne Lamott. This one was a recent recommendation by a friend via Facebook so, as with Manchild, I ordered it from Amazon in spite of the 2 bins of dust-collected books waiting patiently for me in the pick-up. (Next in line is Vonnegut’s Cat’s Cradle, one I’m almost certain I’d purchased and discarded without reading years ago, but was recommended in that same Facebook thread and arrived in the same Amazon delivery.)

Quick side note, one of the very few books I read back in my non-reading days as a teenager was Helter Skelter by Charles Manson’s prosecutor Vincent Bugliosi, and Curt Gentryand, who I assume did most of the heavy lifting. I heartily recommend it, especially if you’re a fan of horror. It’s fascinating, terrifying and spellbinding. It came to mind when I noticed that Gavin Newson just denied Leslie Van Houten’s parole for the second time, which made me wonder whether any of the Manson family members should ever be paroled. I think not. Curious how you feel about that. Comment anyone?

(No one associated with the Tate-LaBianca murders has been paroled. Only one Manson family member was ever paroled, Steve ‘Clem’ Grogan, who had participated in yet another Manson-instigated murder. Grogan was essentially paroled for being too stupid to decide anything for himself, including murder.