I arrived here on the mountain Thursday afternoon and it’s been an education. Where to start.

At the beginning I guess. (Pour yourself a cocktail. This might take a minute.) I decided to sell my house (did I decide?) and move into an off-grid-equipped trailer sometime around January or February of this year. I did a lot of research. I bought a lot of stuff in advance of the transition from home owner to RV owner. As it turned out, I did a good job researching and had all the stuff I needed. I had stuff. What I lacked was any experience at this. What I’ve learned this week is how much experience matters.

I made rookie mistakes. As I mentioned in a previous post, I came out here without filling my fresh water tank. Wow, big mistake. Drinking water’s not a problem, I have plenty. But try cleaning dishes with drips of water. I’m actually pretty good at it now but I’d rather be using more than a few drips. And showers are, naturally, out.

Speaking of showers, I don’t really need one since the weather report about this location was off by a lot. You couldn’t tell from Google Maps – or maybe I didn’t look close enough – but I’m 3 miles up a mountain. So not only was the weather report off by about 15 or more degrees, I’m X feet up a mountain where it’s, you know, colder. Last night, for instance, dipped into the 20s. Not the plan.

And as it turns out, my very cool, very techy off-grid solar system is failing. The battery isn’t holding its charge once the sun goes down. (Oh, and there wasn’t a whole lot of sun for the past few days until today.) what that means is that at a certain point, I have zero electricity which means no heat. The furnace operates on propane which I have plenty of, but it won’t turn on or operate without a little electric current running to it. So for two nights, I had no heat. Or light.

I’ve already described what it took to bring the battery back to life. I had to go through that painful ritual twice, Sunday and Monday morning after mostly sleepless and very cold nights. But you don’t have to tell me more than twice. Yesterday, I re-positioned the trailer so that jumping and charging the battery would be much less of a hassle. I also charged the battery with my trusty generator for 45 minutes or so at sunset in an attempt to mitigate the need for another a.m. jump and charge. And that strategy apparently worked because the system didn’t shut down last night.

Theoretically, I won’t be charging the battery tonight because, science experiment that I am with this trailer, I’m testing to see whether I can last a night without the generator. I’ll be reporting back to my incredibly talented and humane service provider in Mesa who is now in regular touch with the manufacturer of the system who is now fully engaged in my less than ideal experience with their equipment. I’ll be keeping a close eye on the battery charge level though just in case. I have no desire to sleep cold again this week.

Experience. When you’re off-grid, the trash doesn’t stop accumulating. That’s been on my mind as I’ve been making every square inch of my trash bag count. But that only works for so long. This morning, I had a full trash bag. Like really full. And a little smelly. Banana peel mostly. I also had exhausted one of my propane tanks. (The trailer accommodates two and I have a spare in the pick-up.) Having at least temporarily escaped the burden of jumping/charging the battery, I was motivated to drive into town and try to accomplish a couple of things.

I’ve been living on a grade. In order to position the trailer in a way that I could access it easily for a quick jump, the front end was annoyingly (dangerously?) lower than the rear because I’d neglected to anticipate the need for anything more than a block of railroad tie to jack the trailer up onto. Not an issue at most campsites but out here on the mountain, not such level ground. With the wind blowing like it has been and my jack at the limit of its extension, and being on that angle, I thought I should try to find another block of wood or the equivalent.

So off I went into town to fill the propane tank, (I’d noticed a sign for propane on my trip to buy jumper cables,) snoop around for more height to put under the jack and I also had a fantasy that maybe I could jury-rig a way to get some water into my fresh water tank.

Dumb luck that I went for the propane first because I was greeted there by a sign that propane service ended at 1pm. I’d arrived at around 1:15. It so happened that the guy working the propane system (turned out he was the owner) didn’t keep very good track of time and was still filling tanks when I drove in. With regard to the trash bag, my plan was to ask everyone I came in contact with whether there was anyplace in town that I could pay – like a town dump – to toss the bag along with a few broken down shipping boxes. So I asked the propane man. No, he said, there was no such place. But he’d open the gate out back and I could thrown the stuff in his dumpster. 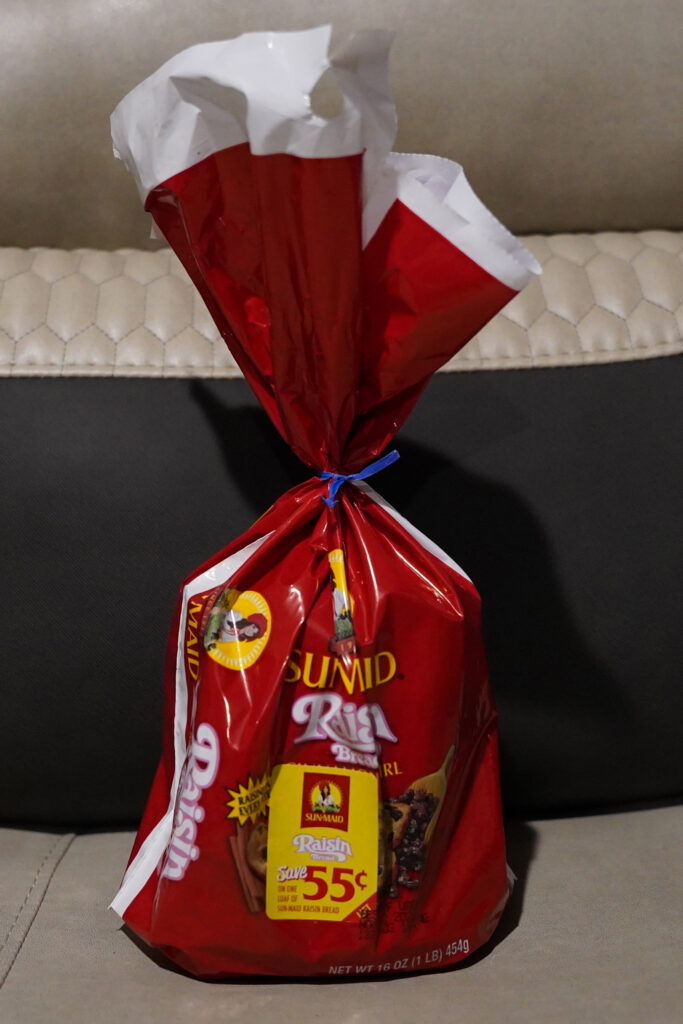 I stopped next at the Dollar Store where I bought 6 gallons of water. They had no bread which I’d been jonesing for. The combo Ace Hardware/back-woods grocery store down the road didn’t have any blocks of wood, but they did have some plastic leveling blocks made for RVs so I bought 2 4-packs of those. They also had bread. Various packages of wraps and five or six loaves of Sunmaid raisin bread. I took the raisin bread. Final stop was the local family-owned hardware store. He didn’t have any blocks of wood, but he did have a bunch of 2X4 cut ends. I took six. He wouldn’t charge me and it was no big deal. To him. To me it was a big deal.

I started driving back to Ace to return the plastic leveling blocks but halfway there I thought, maybe I’ll need them one day. I turned around and returned to the mountain. Along the way I realized I had a funnel. More than one actually. That was the answer to my fresh tank dilemma. The leveling blocks were needed way sooner than I thought they’d be. 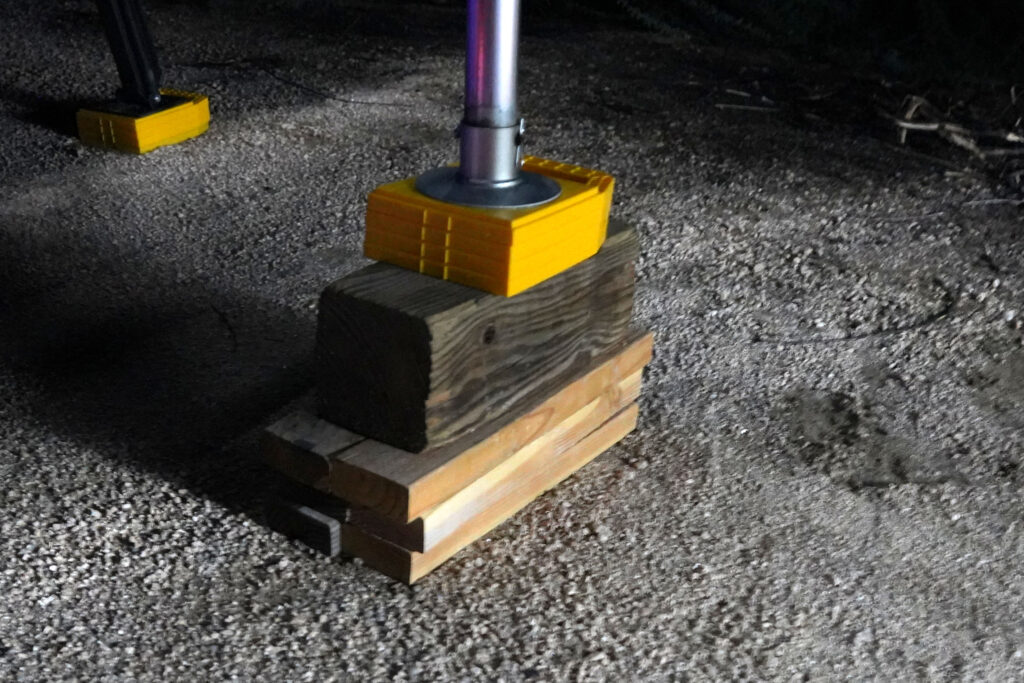 I’m not sure how far 6 gallons of water will get me, but I’m looking forward to finding out. Thin streams will be way better than a few drops. Are we still talking about water? Anyhow, funnels are awesome. 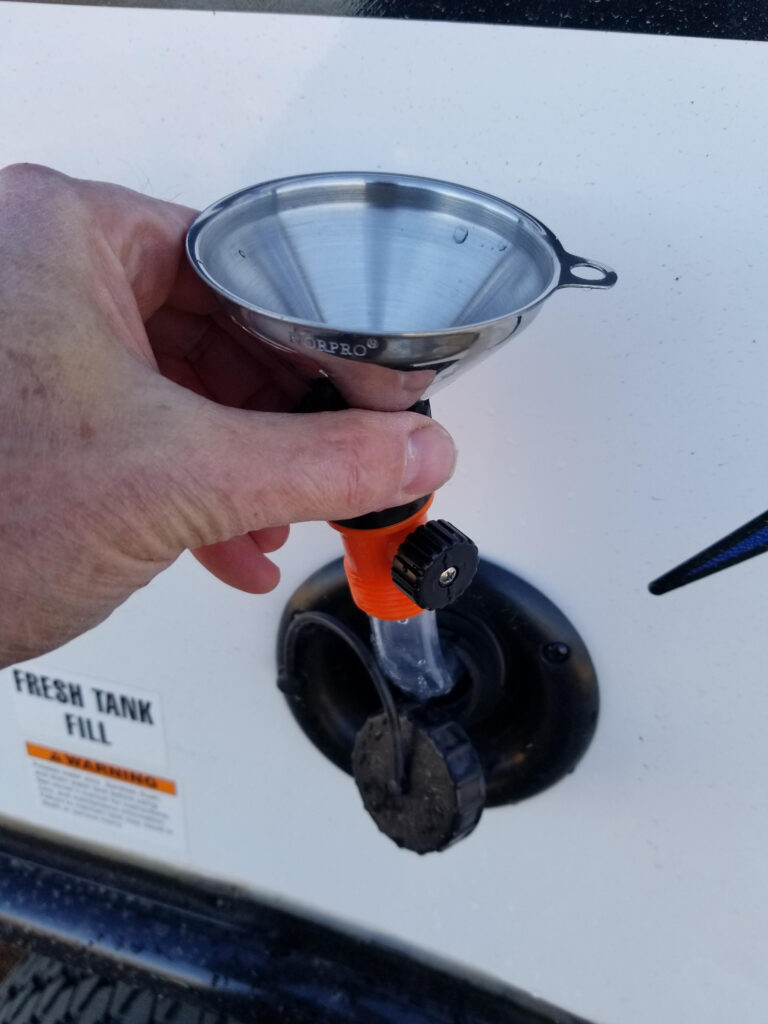 While writing this post I’ve been checking the battery charge. It’s gone from full to 2/3. I’m leaning towards charging it up but haven’t decided. I really don’t want to have to jump the battery again.

I’ll let you know how it turns out.

3 Responses to “Kindness of Strangers”